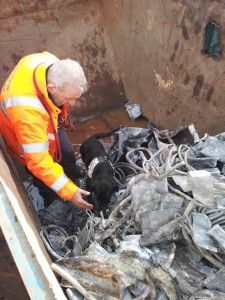 Many large companies (Network Rail, BT etc.) and other organisations (Churches, Schools) have been affected by the scourge of metal theft over recent years. Last year this cost the UK economy £770m. Hence a large number of the victims are using Forensic Security Markers to identify their property. Forensic Security Markers come in various forms but in the main are a spray or grease containing a unique “DNA” which is registered to the individual. The markers contain a UV element which means they show up under a UV light. However the “searcher” must have a line of sight with the marker in order to identify it.

Now for the first time we have trained a dog to sniff out these Forensic Security Markers resulting in them being detectable even when covered. We have collaborated with SelectaMark plc to train the first Forensic Marker Detection Dogs in the world in this field. The dog is able to detect all forms of Forensic Security Marker on all conceivable surfaces, metal, stone, plastics etc.

The result is that large areas which may contain illegal products can now be searched quickly and effectively thus reducing time and therefore reducing cost to the monitoring agency.

Such has been the success of the Forensic Marker Detection Dogs that numerous UK police forces have employed the dog team in various operational searches. These searches have included a variety of locations varied from scrapyards, warehouses, residential properties and pawnbroker type premises.

Police Forces have been quick to see the diversified use of this asset and have used the dog in several “sting” operations where illegal property has been marked with the transferable Forensic Grease by the police waiting for offenders to move it. The dog has then been deployed to locate the grease on the offender’s personal property thus proving that they have handled the illegal property.

Naturally UK Police Forces have wanted their own Forensic Marker Detection Dogs and Search Dogs UK have been proud to assist them in their training. Interest has also come from further afield with the Swedish Police Dog Section sending over a three man team to investigate the discipline.